As an individual blogger, an excited moment for me personally is when meeting with other bloggers to exchange dialogue on internet freedom while I have never ever thought that I have been taken my role as a participant for granted to interact more with other participants that this would hardly be possible if I would be taking a role as an organizer. I have realized that I have been missing my privilege role to interact with great bloggers from the region when I actively engaged as one of main organizers to host BlogFest Asia 2012 that gathered around 200 individuals from several Asian countries from November 1st to 5th, 2012. This third BlogFest, held this time in the historic town of Siem Reap, was earlier held in Hong Kong in 2009 and later in Penang, Malaysia in 2010. The rational of organizing this BlogFest is to offer a venue where people actively share information about media and technology.

However, a great privilege for me to gain and this has been strongly convinced a worth time for me in this role was the fact that I could work closely with young volunteers whose passion with initiative, talent with pride, energy with a sense of humor has filled with hope and put a smile on my face all the time [probably some who met me during the BlogFest may not notice my smile, but I had a hidden smile in my heart if this may have not explicitly shown publicly].

Passion with initiative: I have been inspired in the way that young volunteers had invested their time in arranging and providing their service accordingly to their assigned role ranging from registration, minute taken, social media, and logistic arrangement [it shall be noted that once should talk with our logistic volunteer who had smartly managed his role perfectly while he only sit still at the desk].

They did not wait to follow instruction, but they initiated the way they would handle their role. A young man came to me and another organizer who managed the list of participants for registration, after the pre-event arrangement meeting, asking for the update list of participants in soft copy so that he can make an order in the list in his own way to smooth out the registration process.

Talent with pride: Not only great passion and initiative in work, these young volunteers have not been shy away in showing their potential talent [which I had to admit that I had to push through myself many time, when I was in the same age like them, in order to stand up to show my hidden talent if I may had].

I was mute when a 15-year-old man came to me while I was moderating the MC stage during a dinner gathering of roughly 200 people including Asian and Westerners and only after few foreign participants showed their guitar and music skills, he said: ?Sister, I will play guitar and sing a song called, Tear of a Gangster Child. I have to be proud to show Khmer?s talent in this international stage too.?

I thought he just make a joke with me, but he did it and I was listening with sense of pride. I miss the record during that day, but later I capture this one during our working break:

Energy with sense of humor: Regardless how busy and tiring days we had, these young never complaint that this was a tiring day for them, yet they even could manage to play hard after the each day of the event. Pub-street, a well-known nighttime gathering for local and international tourist in Siem Reap where full of club and restaurants, was filled up by most of BlogFest Asia 2012 participants including our volunteers throughout the days of event. I spent the last night of the event with these young. I could not imagine how to have fun with my ?sex on the beach??a favorite cocktail I always order?without them, while they shared me a lesson to laugh with drinking. A code among few volunteers who I interacted with most often is a laughing code when counting ?1, 2, 3?? 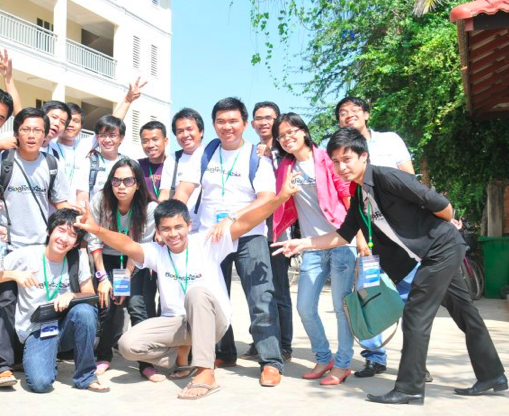 It shall be noted that this was not the first time for them to volunteer in such event, their face are familiar with many event organization and support including a known blog gathering Barcamp. Wonder who they are, check their bio here.

I must admit that I am inspired to write this post in a personal writing style that I rarely did because of the memorization of their passion with initiative, talent with pride, energy with a sense of humor and I owed them with a thank note to fill up my smile for nearly-end of 2012 and some reflection for my 2013 resolution. Stay-tune next with my resolution blogpost.

Thanks. These young has inspired me and I am sure my text can inspire more into their trap 😉