The world is standing with Burmese people

Through networking and assisting of advanced technology including internet and telephone, people had disseminated message around to respond to the violent crackdown on Burmese protestors who have been suppressed by its military-ruled government.

?In support of the incredibly brave friends in : May all people around the world wear a red shirt on Friday, Sep 28. Please forward?

?We will have gathering at in front of Burmese Embassy, please join and forward to many as possible?

?We are planning a prayer on Saturday at in front of for the Burmese with delegates from at least 20 countries. Join us and spread the word?

These messages were spread around and it did happen. In the afternoon of September 28, around 100 people including Burmese with red shirt gathered in front of the Burmese Embassy in . The event was coincident with other movements around word. Even the God could not stay clam–It was raining on the day that helped to bind people to stay close together under the plastic rainy coat. Though raining and restriction from the police not to come close to the Embassy, people insisted to give a statement to the Burmese Ambassador demanding peace and non-violent act for the Burmese Protesters. 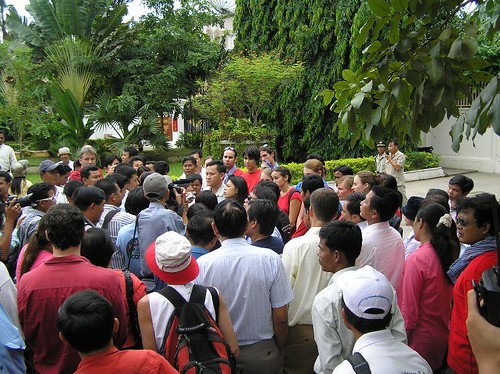 Mean Lux, who i took his picture from behind, helped to spread the message for Red-shirt today

Honestly, it was my first experience to gather for international sack for peace. I was so excited to join the event since I have known two Burmese friends who got exiled due to their work for human rights. Somehow, once I was told that they could not reveal themselves as human rights activists and they could not even return to their home?Burma?I was shock and I feel a little bit lucky that Cambodian situation is not worse so and I do hope that the Cambodia government will prove its real commitment for democracy and development. i just found that Beth has wrote me a post about the event.

In addition, on Saturday in front of , national and international delegates of ?ASEM Seminar on Human Rights: “Freedom of Expression”, organized by Asia-Europe Foundation were gathering and preying for Burmese people. Yellow ribbon which is used as symbol for freedom of expression and peace were distributed during the event. They also issue a statement, condemning the violence that has claimed the lives of demonstrators. To read more , please click here.

Last but not least, I do hope that the world responds will help to relieve the situation and it is very important that ASEAN and UN should play its role. Again, The world movements were shown clearly that Burmese people is not alone.

An article about the current situation in Myanmar. It provides the reader with a brief historical background regarding the situation.

Thanks so much for this great write up. It shows how effective the red t-shirt campaign can be on the ground for an important cause.

I am wondering what you think of this?

[…] cause for Burma. A group of Cambodian rights activists, net-citizens, and ordinary people wearing red-shirt gathered to protest in front of Burmese Embassy of Cambodia for the same solidarity cause for Burma […]